The London Beefeaters were hammered with an ice-cold blast of reality in a 51-1 pounding by the powerhouse Saskatoon Hilltops in the Canadian Junior Football League semifinal Saturday night at TD Stadium.

Bailey Taylor picked off Beefeaters quarterback Jake Pow on London’s first possession and Rylan Kleiter kicked a 22-yard field goal to give Saskatoon a 3-0 lead and the five-time defending national champions went on to score on their next five possessions to build up 34-1 lead going into half time.

Saskatoon quarterback Tyler Herman threw three touchdowns in the first half — a 75-yard and  a 52-yard catch and run by Connor Graham and a 20-yard TD pass to Keegan Dicks. Ben Abrook also ran in a four-yard touchdown under wet and frosty conditions at TD Stadium.

The Beefeaters defeated the defending Ontario Football Conference champion Hamilton Hurricanes in the OFC semifinals and the Windsor AKO Fratmen in the final.

Both of those playoff wins came on the road and first-year coach Jesse Maddox said the Beefs punched and bullied the Fratmen in their 28-20 Ontario championship win in Windsor. But the Beefs were the team taking the blows Saturday against the Toppers.

“We got a reality check today,” Maddox said. “Last week (against Windsor) we were the physical team and this week we weren’t. . .  . Ultimately I’m proud of my guys, I’m proud of my coaching staff, but there’s lots more work to do.”

Maddox said his young team has much to be proud of in winning an Ontario championship for the first time in seven years, but the Beefs fell two wins short of their ultimate goal of national title. 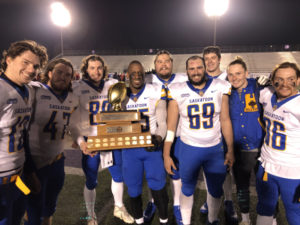 The Beefs boasted one of the best defences in the country going into Saturday night’s national semifinal, giving up just 87 points in eight regular season games, but they couldn’t do much to stop the Hilltops, who will be gunning for their sixth straight national championship when they play the Langley Rams on Nov. 16 in British Columbia for the Canada Bowl.

The Hilltops have won eight of the past nine CJFL championships. The 1999 AKO Fratmen are the last Ontario team to claim a national championship. The Beefs lost 51-7 to the Hilltops in their last CJFL semifinal appearance in 2012 in Saskatoon.

Sargeant said he was impressed with the Beefeaters aggression and physicality in the opening minutes of Saturday’s game, but the early interception, put them on their heels and the Hilltops seized the momentum with a barrage of devastating deep passes.

“They did a pretty good job being physical on the line of scrimmage but we loosened them up by making some big plays over top and we had a good mix after that, but our defence was lights out tonight,” Sargeant said.

“Coach Maddox and his staff are doing a good job. They are a good football team, but we’ve been in these games a lot. As long as they stay together and play together, they are a team on the rise. We have 15 fifth-year players so that’s a lot of experience and a lot of savvy that’s been through the wars quite a bit.”

Leo Centeno scored London’s only point on a rouge after going wide on a 30-yard field goal attempt.