Facility To Be Future Home Of Windsor Fratmen 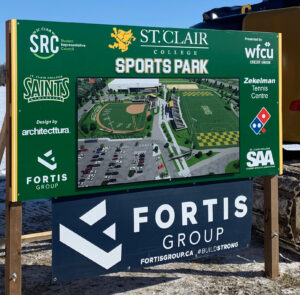 Students, staff and the community gathered today to witness the ground breaking ceremony for the new St Clair College Sports Park, This exciting project will provide students and the community with state-of-the-art facilities for soccer/football, softball, beach volleyball courts and indoor tennis courts.

The multi-year project will see the complete rejuvenation of the College’s current outdoor sports facilities at the south end of the campus.

The Sports Park will boast 1,500 seat soccer/football field complete with artificial turf, digital score board and press box, a 400 seat softball diamond with artificial field, team rooms and scoreboard, concession stands and four lighted beach volleyball courts with a lounge. Indoor tennis courts will be developed in the later part of the project. 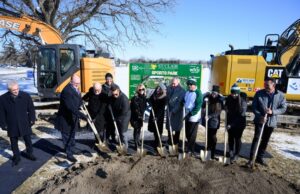 The project will be overseen by the Student Representative Council (SRC) and the Student Athletic Association. Support from the community has been unparalleled thanks to the generous sponsorship from the Barry and Stephanie Zekelman Foundation and Michael Schlater, CEO of Dominos Canada. In addition the College also is grateful to the WFCU Credit Union, Fortis Group, Architecturra Inc., the City of Windsor and Town of Tecumseh for their continued support

For more information please check out the following links. 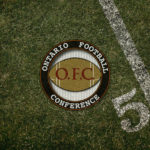 This was not the ending the Windsor Fratmen had envisioned and it’s one that won’t easily be forgotten.

Miscues and squandered chances dashed the top-seeded Fratmen’s hopes for an Ontario Football Conference title as the London Beefeater handed Windsor its first home loss of the season with a 28-20 win in Sunday’s final at Alumni Field.

“Frustration levels are high right now, but you just have to use it as motivation for next year,” Fratmen receiver Cody Holmes said. “It fuels me. I’m watching these guys celebrate on my field and I’m not taking it too well, but, next year, they’ve got to see me.”

The third-seeded Beefeaters upset Hamilton in the semis to advance to the final and came ready to play on Sunday after splitting two regular-season games with AKO.

“We worked really hard for this and prepared a lot,” said Beefeaters running back Danny Byrne, who is a L’Essor high school grad now at school in London. “It feels good to have it all pay off.”

Windsor’s talent flashed on occasion in the game, but the Fratmen simply weren’t consistent enough in all three phases against the Beefeaters.

“In order to win against a good football team like the Fratmen, you have to play good in all three phases,” said Byrne who is an Essex Ravens product.

“It’s really a team game and you have to play good in all three phases. We were just trying to be physical. We were trying to win the line of scrimmage. Win the point of attack.

In the end, it’s that battle to for physical supremacy that Fratmen head coach Mike LaChance said cost his team.

“They were more physical than we were and we talked about that all week being the more physical team,” LaChance said. “(In the final), we weren’t. They outphysicaled us at the point of attack, both offensively and defensively, and, quite frankly, on special teams, too. Generally speaking, in championship games, that’s who’s going to win is the team that’s more physical and they did a better job of it.”

But LaChance, who is in his 16th season with the club, wasn’t about to pin the loss on his players.

“You can’t look at an 18-year-old and say he made a mistake or a young quarterback’s throw was a mistake. At this level, it comes down to coaching and I didn’t have our team prepared. It’s not just on the kids. We have a 50-man roster and a 12-man coaching staff and it’s on everyone.”

After Holmes opened the scoring, the Beefeaters responded with three-straight touchdowns. A Michael Ryan touchdown had the Fratmen to within 21-13 at the half.

Jared Hayes-Williams’ touchdown catch got the Fratmen to within eight points midway through the final quarter, but miscues proved costly down the stretch.

“We had over 400 yards offence,” LaChance said. “I think we moved the ball pretty cleanly. We still had chances to win the game in the end. We had four possessions in the last five minutes of the game and we just made silly mistakes.”

So, all the Fratmen could do was watch the Beefeaters savour the victory while looking at an off-season that Holmes hopes provides motivation.

“Tough man, it sucks,” Holmes said. “Tough L (loss), but it is what it is and lock and load and get ready for next year.

“Watch them celebrate. That’s all I can say. They’re celebrating on our field. (For me), second place is a fail. We didn’t win, that’s it. So, that’s motivation for us.”