“The Saints Student Athletic Association is happy to make this announcement as we are always looking to expand our athletic portfolio.  We think this is a great opportunity to offer football enthusiasm to the student body on campus,” stated SAA President Kshitij Punj who addressed staff and media gathered at the SportsPlex.  Punj continued, “The SAA board and I are looking forward to the challenge of being directly involved with the operations of this team and are indeed excited about it.” 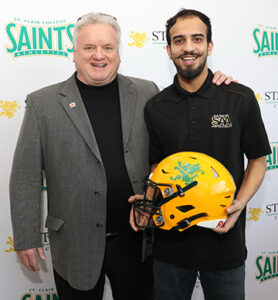 This innovative partnership between the Fratmen Football franchise and the Saints Student Athletic Association Incorporated will be the first of its kind in Ontario.  As of this announcement the Student Athletic Association Inc. will assume ownership of the Fratmen Football team taking responsibility for the business and game day operations of the program.

Beginning with the 2020 season the team will play and practice at the soon to be completed St. Clair College Sports Park.  Construction of the 20-million-dollar complex is set to be finalized in mid-summer with the facility featuring a full artificial turf playing surface that is fully lit for evening play, 1,500-seat capacity stadium seating including a media press box along with a jumbo interactive score board.

The Saints Student Athletic Association Inc. is thrilled to be partnered with the storied history and success of the Fratmen brand who are the longest running amateur sport organization in Canada which began in 1929 and has won 3 National Titles during that span.  The Fratmen were also the first Canadian Junior Football League team to be honoured in the Canadian Football Hall of Fame and have been featured in the Museum’s locker room exhibit.

The team will continue to play in the Ontario Football Conference which is part of the Canadian Junior Football League with a fall season stretching from August to November.  The current Fratmen coaching staff will remain intact with recruitment already in full swing for next season.  Head Coach Mike Lachance will announce his coaching staff in the coming weeks assisted further by Joe Cleroux who will be retained to assist with league matters and compliance. 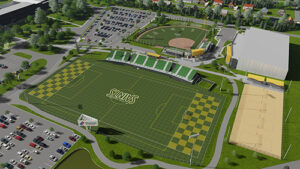 Rostered players on the football team who are enrolled full-time in the fall semester at St. Clair College will continue to enjoy a $1,250.00 scholarship with access to several other bursaries and financial aid opportunities.  However, student status at St. Clair College is not required for access to the playing roster.  Rick Cranker along with St. Clair Athletic Coordinator Ted Beale will serve as education liaisons for current and prospective football team members.

For information about the St. Clair Fratmen use the contacts below.